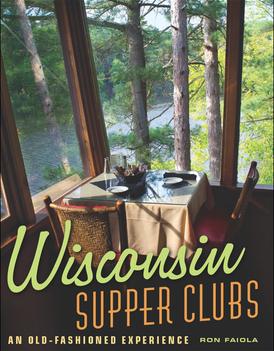 Wisconsin Supper Clubs: An Old Fashioned Experience shows why supper clubs are such a big part of Wisconsin's food culture and the full experience of supper club dining; a brandy old fashioned sweet at the bar, relish trays at the table, huge portions of steaks, seafood and game, and the friendly, loyal customers who have been dining at their favorite places for so many years.

​Shop for it at your local independent bookstore, Barnes & Noble, Costco, Target, Wal-Mart and online at Amazon.com or BN.com. Hardcover book,

surrounding the swamp on the higher grounds. During the late teens, the power company built the dam on the south end of the swamp and a body of water was formed, known as the Millpond, also part of Balsam Lake.

There also were Indian burial grounds a few blocks north of County Road I along Park Drive in the lowlands by the lake.

For the first 12 years of his life, Chief Archie Mosay lived on the land where Indianhead Lodge now stands. At that time, W.H. Parks owned the land and asked Archie and his families if they would move south of the dam so the land where they had been living could be developed.

Indianhead was constructed from start to finish in 36 days, including the fireplaces. Indianhead was owned by Walter and Dorothy Andersen, general contractor was Herluf Paulsen. Much of the decor at Indianhead is original. For 71 years, Indianhead Supper Club has been known to locals and visitors as a landmark for its comfortable lodge atmosphere and outstanding cuisine.

The land by the Millpond, which Indianhead Lodge is built on, was the home of the Chief of the Ojibway Indians, Archie Mosay, his parents, grandparents and their families. Chief Archie Mosay was born August 20, 1908, on this land and lived with his family in wigwams during the summer, then moved into a teepee in the winter for warmth. There were no stores here yet, so the families walked through the woods to St. Croix Falls for their groceries. They would leave very early in the morning and get to St. Croix Falls by noon, do their shopping and get back home just before dark.

Prior to the Millpond becoming a body of water, it was a swamp with lots of brush and small trees. There were many beautiful huge pine trees

Jeff and Bruce purchased Indianhead in the spring of 2022. Both have been coming to Indianhead for several years. They intend to keep the Indianhead Supper Club tradition alive and well in Balsam Lake.

Roark has been giving guests exceptional cuisine at Indianhead for several years. Trained at the French Culinary School in New York, Roark has an extensive resume with fine dining at restaurants in New York City and Minneapolis.

"There is absolutely no substitute for the best. Good food cannot be made of inferior ingredients masked with high flavor. It is true thrift to use the best ingredients available and to waste nothing."